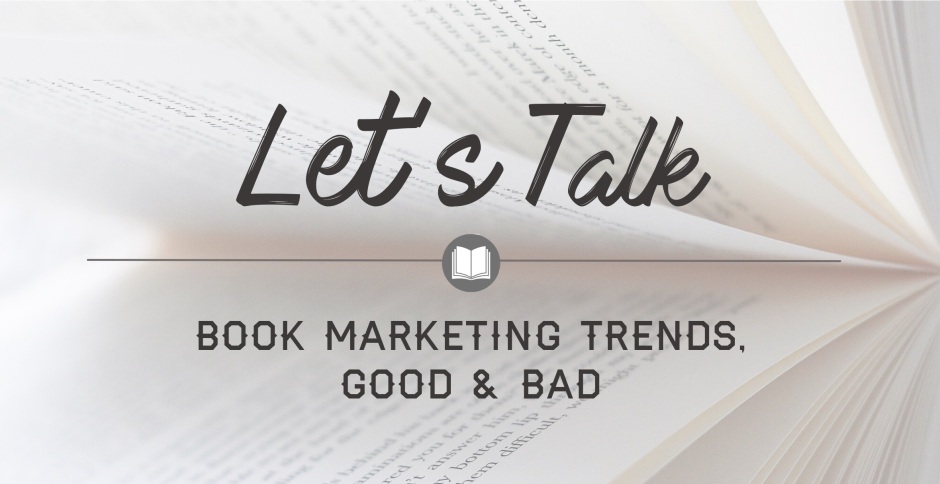 If you’re an avid reader, then you’re likely very familiar with many of the common trends utilised by publishers to market books these days. Where some methods seem to be effective from a sales perspective whilst also being enjoyable and useful from a reader’s standpoint, there are certain others that lean towards being deceptive or just plain annoying. After seeing a post by Michelle on Chelle’s Book Ramblings regarding how book marketing affects our reviewing, I thought it might be fun to look at the good and the bad of current book marketing methods. Let’s get stuck in.

I’m almost positive that you’ve come across this method at one point or another because I know I have about, oh, a hundred times. You know the one, where a cover name drops one or two big name books, series or authors, claiming that if you’re a fan of them, you’ll definitely love this book. In all fairness, this trend has the potential to go either way depending on the book it’s being used to promote. Sometimes this can be helpful in finding something to read based on things you already like but my biggest problem is that the same books and authors are used over and over again just because they’re popular. This is the case even when the only commonality is genre. It’s a bit like a C-list reality celeb trying to name drop an Oscar winner at an actors party. Awkward. It’s also extremely deceptive to go into something marketed as being something it’s not. Hello, crushing disappointment and frustration. Sorry publishers, but as much as you’d like me to believe it, not every book in the YA fantasy genre is for fans of Leigh Bardugo or Sarah J. Maas.

Is it just me or are book titles starting to look more and more like a game of fill in the blanks (E.g. [Something] of [Something] and [Something]) or as though publishers are only allowed to use words from a select list of specific terms (e.g. Shadow, Queen, Thorns, Daughter, Blood, Night, Ash, etc.)?Paperfury actually wrote an entire post about title based trends such as these if you’re interested. While I get that publishers are trying to stick with what they believe works in and appeals to the market, at the same time, I’m getting majorly confused here. I go looking for House of Salt and Sorrows and end up at Master of Sorrows instead, or how about Daughter of Smoke and Bone, and Leigh Bardugo’s Shadow and Bone, and don’t even get me started on just how many ‘City of….’ based titles there are. Help a book loving girl out here! Try something a bit more memorable and original.

This is a marketing strategy that’s become very popular nowadays. From a reader’s perspective, it’s a great. Well, aside from making the wait for anticipated releases even more agonising. I love being able to read advanced reviews from people with similar attitudes to my own. It means I know what to expect going into something and whether or not it’ll be something I enjoy. With so much to read, I ain’t got time for disappointment.

For publishers, this strategy can fuel sales but also risks damaging them. In sending ARCs out, they almost guarantee that a book will consistently be on readers’ radars leading up to release day, fanning the hype flames. Even those who don’t ordinarily gravitate toward that type of read may buy it simply because they can’t get it out of their head. Add in a string of positive early reviews, and you’re pretty much set for success. However, there’s always the chance that early reactions to a book will be negative and widespread, severely damaging efforts for a strong release.

Every genre has its own set of cover trends. Modern romance? Cute, graphic designed people. Crime? Photographs of ominous buildings or female faces. Contemporary fiction? Large, funky looking title text. You get the picture. They’re all targeted to appeal to the audience that reads those books. By adhering to cover trends, publishers are able to package a book in a way that’s familiar to genre readers (especially with debuts), encouraging them to draw similarities between it and others in the genre they’ve liked. The problem is though, sometimes this can end up being misleading when it comes to content.

Just because a book falls under a specific genre doesn’t mean it also sits within the same subgenre as books which have previously embraced that cover trend. One example Michelle raised in her post was Meet Cute by Helena Hunting. This is a romance book whose cover makes it look purely like a fluffy, cutesy romance. In reality, it’s a lot more serious in that it revolves largely around a a custody case and involves multiple personal tragedies. While a book may still be enjoyable despite not being what you expected, it’s hard not to feel a little deceived and betrayed by a misleading cover.

This has to be one of the smartest book marketing strategies on this list. Why? Because there’s basically no downside to it for publishers (except perhaps printing costs or the like) AND readers (ecstatic because they’ve gotten something for nothing). Pre-order numbers are extremely important for authors, especially newish authors. So offering readers an incentive to pre-order is a great way of getting early purchase numbers up for a book, which can potentially impact the size of the print run. All the publisher has to do is throw in a free print or perhaps a chance at winning a signed copy and they’re golden. As a reader, all your doing is paying what you would have had you purchased the book post-release, so it’s pretty much a ‘why not?’ scenario. Win-win.

Author signings are another marketing strategy which usually work well for both readers and publishers. If there’s something bookworms love, it’s getting to meet the writers of their favourite reads and bombarding them with questions. Signings increase the hype for a release and encourage readers to buy the book purely so they can get a personalised signed copy. I will say, though, this does work better promotion wise when you have a charismatic, interesting or funny author. I’ve been to signings where people are there purely because of friends, having never read one of the author’s books, but come away buying a copy because they enjoyed an author’s personality and Q&A so much. Still, these tours seem to be the done thing for authors these days regardless.

It’s clear that book marketing methods aren’t always the best for readers and publishers simultaneously. And while these strategies may be all the rage now, it’s reasonable to expect that new approaches will develop in the near future. After all, if it works, it works, right?

Which book marketing strategies do you most appreciate from a reader’s POV? Which ones drive you mad with frustration?