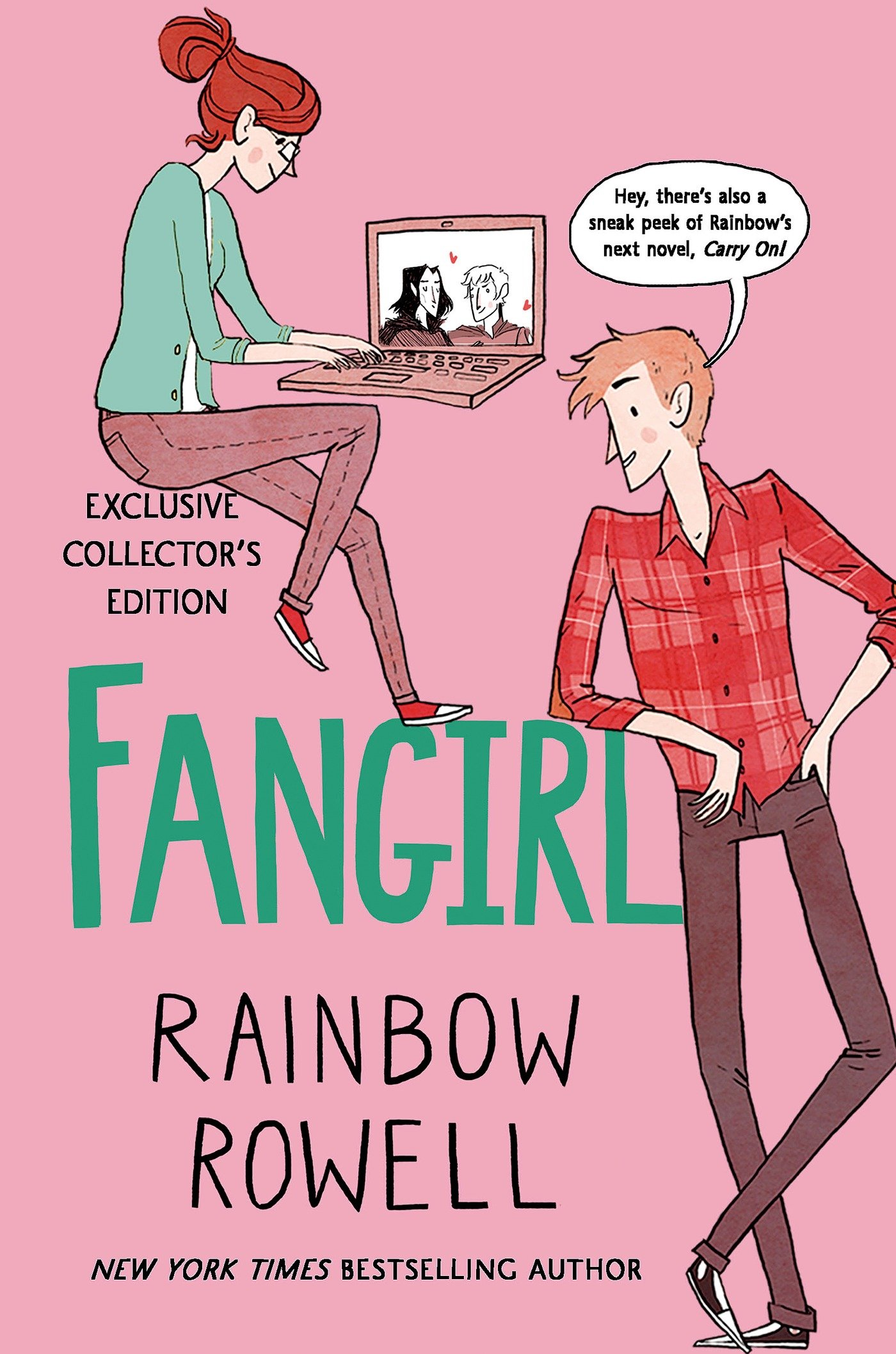 As you may or may not have been aware of from either Goodreads or a sneaky glance at my blog home page, I recently (finally) got my butt into gear and read Fangirl by Rainbow Rowell. For those like me that are still massively behind on the YA contemporary trends, Fangirl’s central character, Cath, is a very popular fanfiction writer. She has thousands of readers and has even won awards for her stories. Basically, Cath lives and breathes fanfic. Her fandom of choice is a Rowell created series about a teen named Simon Snow which has some big similarities to something that rhymes with Gary Trotter. Just as you’d expect, reading this book got me thinking about fanfiction.

These days I feel like fanfiction gets a bit of a bad rap from the reading and broader community. People don’t seem to understand it and have a tendency to brush it off as being simplistic, weird, trashy, obsessive, even creepy. I’m in no way naïve enough to not be aware of the…darker and dodgier areas of the fanfiction webverse (come on, it is the internet), but at the same time, I also believe people discount the value of fanfic and the amount of work that goes into it. I’ll even willingly admit that during NaNoWriMo, I caught myself making a face at the idea that some people were spending their challenge working on fanfiction rather than original work (which is stupid considering I used to write it myself in my teen years – Twilight fics *shivers* dark days, guys, very dark days). Yet, now that I’ve sat down and thought about it (as well as chastised myself for being an idiot), while it may have it’s issues, fanfiction actually holds a lot of really great benefits.

Pick any book, television show or movie in the world and I guarantee you that somewhere out there is a devoted group of fans who absolutely worship it beyond imagination. And the thing about fans is, once they get a taste of something, they just can’t get enough. Fanfiction is a fantastic way for people to not only constructively express their love of a particular fandom (okay, sometimes constructively), but also help them to connect with like-minded people. For the commonly found introvert (much like Cath in Fangirl), this is a good opportunity for socialisation and the ability to bond over a common interest. For people who have trouble socialising or difficulty finding others in the real world who share their interests, it’s a fantastic solution.

Writing is hard. Like, seriously hard. Plotting without epic holes, creating layered and interesting characters, world building that makes sense, and then there’s writing style (or in my case, trying to avoid saying ‘he said’, ‘she said’ fifty million times in one conversation. I panic, okay!). Fanfiction can be a great way for newbie writers to develop their skills. By already having a deep understanding of the characters, setting and rules, fanfic writers are able to focus on plot and the actual writing itself. I look back on my fanfiction entries from a decade ago (the horror) and can definitely see a big improvement in the way I write as I go along. It’s like writing with a support system in place until that person decides to try their hand at something original. They have the freedom to experiment and try new things in a safe space. The fact that people are then able to comment on their posts can also be a good way (well, not always) for those writers to get a sense of what they’re doing well and where they could improve.

I don’t think it’s wrong to say that there are many people out there who enjoy certain fanfictions just as much, or perhaps even more, than some published books. Some fics build up enormous followings of people, thousands and thousands, who sit around excitedly waiting for a new chapter update and drop everything upon publication. In some instances this popularity factor is so big that it even drives fics toward publication as their own works, complete with a full set of name changes. I mean, just look at (I can’t believe I’m actually using this as an example) Fifty Shades of Grey. If you want to understand the power of people’s love for fanfiction, look no further than the money making force that is that trilogy. Sure, there are large percentages of fanfic that fall into the “trashy” category but hey, if it’s not damaging people with toxic ideas, what’s the harm in bringing people a bit of fun and enjoyment?

One of the really fun parts of fanfiction is its ability to build on and expand canon stories in interesting ways. I can’t even count how many times I’ve come across a loose end I needed explained or a character that I wish I could have gotten to know better. Perhaps a sequence of events was mentioned during the narrative that would be cool to read about more directly or maybe the world has such a rich history ala A Song of Ice and Fire that’s it’s just bursting with stories? Well, fanfiction is the answer. There is a wealth of fics for every whim, interest, history, plot gap, romance, and side character. Fanfics can also be a great way to continue on with a beloved series or story even after it’s finished. While the published books may be over, the characters and their adventures can continue on through the writing of others.

I think it’s an understatement to say that there are some severe representation issues within mainstream books. We’ve made some great steps forward recently but there’s still a long way to go. A great characteristic of fanfiction is it’s diversity and inclusivity. No matter your interest, there’s fanfiction out there somwhere to float your particular boat (even if it happens to be…Drarry). Unlike published stories, online fanfiction isn’t bound by the rules of what publishers believe is “mainstream”/popular or will sell. Fanfiction can be written by absolutely anyone and its writers have the amazing freedom to take existing narratives & characters, and rework them to place a spotlight on the more marginalised and minority based groups. By giving these types of characters starring roles and more prominent stories within an already popular setting, they help those who enjoy, but often have difficulty seeing themselves in, the original works to find common ground and relatability.

Are you someone who enjoys reading fan fiction? If so, from what kinds of fandoms? What’s your favourite website? Do you have a favourite fic?

Are you a fan fiction writer? If so, what about it appeals to you? What are your favourite types of fics to write?

16 thoughts on “Let’s Talk: What’s so Good about Fanfiction?”