No Mourners, No Funerals

I’m sure there have been a whole heap of these already (including the booktube one which honestly didn’t really float my boat) but I’ve decided to do it anyway.  It’s been on my mind for ages to create my own Six of Crows tag. I’ve never made a tag before and I really love Six of Crows, so why not just go for it? The characters in Six of Crows are so diverse and fantastic that they just scream book tag so here they are – 6 characters, 6 questions. Sounds easy, right? 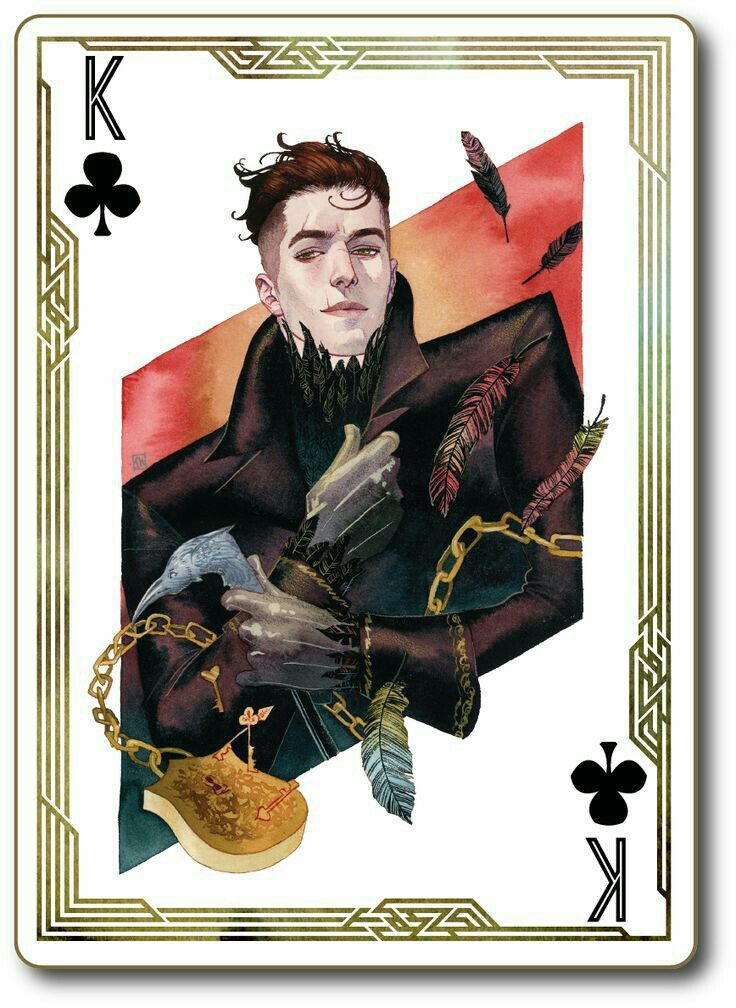 Holland – A Darker Shade of Magic Series by V. E. Schwab: Holland’s an interesting character in that you’re unsure for quite a while as to what his nature truly is. A Conjuring of Light was great in that we learnt more about Holland’s history and how he came to be where he was when we first began the series. He’s a character far more on the grey scale than Kell due to the nature of the life he’s led. Although Holland’s means aren’t always the purest, deep down his intentions are good. INEJ GHAFA: A BOOK WITH A TWIST YOU DIDN’T SEE COMING

Illuminae by Amie Kaufman & Jay Kristoff – There’s a twist about two thirds of the way through which I really wasn’t expecting. It turned out not to be true later on but at the time, I was so shocked. I couldn’t believe I’d been so easily manipulated for so many chapters, much like one the main characters. Pesky AI… JESPER FAHEY: AN AUTHOR THAT NEVER MISSES THE MARK

I’m going to cheat a little here and say Richelle Mead for this because until I read Soundless, I absolutely loved every book of hers I’d ever read and trust me when I say that her books take up a good shelf and a half of my bookcase all on their own.

NINA ZENIK: A BOOK THAT BROKE YOUR HEART OR GAVE YOU ALL THE FEELS

My Sister’s Keeper – Jodi Picoult: This book was a roller coaster emotionally. The characters are written so well that you feel everything they do as if they were your own family. And just when you reach the end and you think it’s all over, the story punches you in the gut with the most devastating moment ever. I cried, massively. Then I re-read the book a few years later, and cried again. The final chapter was an absolute sob-fest.

Also special mention to Harry Potter and the Deathly Hallows: So many character deaths plus having to deal with it being the end to one of my favourite series ever. * cries*

Two for the price of one for this question.

Simon Lewis – The Mortal Instruments by Cassandra Clare: Simon is a vampire and thus a downworlder. This makes things a little tricky as the members of his close circle of relationships are nearly all shadowhunters who don’t always have the best interactions with the downworlder community. Finding his place in between the two sides and working out where to stand on certain issues is a constant challenge for him but it also adds interesting conflict to his storylines.

Eugiene Markham (Dark Swan Series): Eugenie is a shaman, which means she’s paid to deal with troublesome fey who make their way into the human world. However once she becomes queen of a fairy dominion, things become very messy. She often faces difficulty reconciling the needs of her fey subjects with what she knows to be the right thing to do for humans. And of course, the fact that her two potential love interests also fall on different sides of the equation makes it even harder. WYLAN VAN ECK: A BOOK THAT WENT OUT WITH A BANG OR A CLIFF-HANGER

Catching Fire by Suzanne Collins – It was all happening at the end of this book. We had a massive lightning bolt blow up an arena, Katniss being rescued by the resistance, finding out about the existence of District 13, Peta’s capture, and a whole host of other things. Definitely a bang.

And there you have it!

If you feel like engaging in a little bit of Six of Crows tagging fun, I tag you! Go forth and enjoy! Otherwise, here are nine lovely people I tag to share in the fun. As usual, if you don’t want to or don’t usually do these, I completely get it.

Jackie @  Too Much of a Book Nerd (Maybe this will push her to actually read it!)

22 thoughts on “The Six of Crows Book Tag”